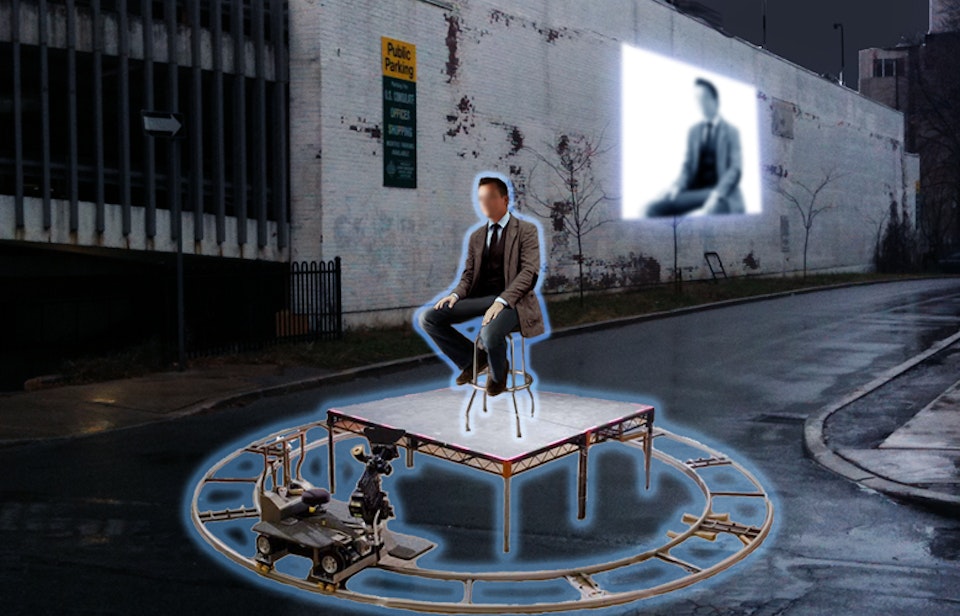 On October 1st 2011 at 7:00 p.m., we began filming a circular dolly shot and continued for 12 straight hours, finishing at 7:00 a.m. the next morning. Throughout this 12-hour cycle, spectators were invited to participate – using the stage in any manner they saw fit. The footage was captured in one single, uninterrupted, 12-hour take. The installation began at 7:00pm, and continued until 7:00pm the following morning – capturing daylight, dusk, evening, and dawn.

The dolly shot is the most revered, powerful and evocative moment in a film’s making. The mechanics are straightforward – a camera is mounted on a wheeled platform that glides effortlessly and smoothly along a set of rails. While technically simple, the effect of an extended moving shot can be transcendent. It provides a visual encounter that embraces the physical gravity of the world, provoking feelings of intimacy, harmony, and revelation. For 12 Hour Dolly, a professional film crew will set up a circular dolly track and film continuously for 12 straight hours. Located in the centre is a makeshift stage with a single stool. One-by-one, spectators are invited to sit centre-stage and participate in the making of a film. A live stream from the camera is projected onto an adjacent wall for spectators to view like an outdoor movie. This Interactive Art and FIlm will transform the cityscape through the intervention of cinema. As both a performance and tool for performance, 12 Hour Dolly engages the audience in an experience of what happens in front of and behind the camera.